From the Principal’s desk
Boston Primary School has always been about providing children with the opportunity to excel at academics, sports and culture. When Boston opened in 1960, this was made evident by the quality of the academic staff and academic programs and the sporting facilities and programs. We are very proud of producing a good few generations of highly successful adults in the workplace and on the sports field: SA cricket, rugby, tennis, swimming, hockey players.
We have continued to invest in our children, our community and our facilities to ensure we continue to deliver world class education and excellent facilities. We are particularly proud of ensuring we offer not just the usual curriculum but have extended the program to include specialist subjects like music, art, library and computer studies. The School also has a very effective Intervention and Remedial programme.
Importantly, while high academic and sports standards have been a Boston hallmark, improvement in connecting with our parents and community has become crucial to us.
Our core business is teaching and learning and our emphasis on academic excellence is the cornerstone around which all other activities are organised. In keeping with our mission statement, we aspire to develop well-rounded individuals who will positively influence our society. I am proud to be the Principal of a school that has the support of the learners, parents and teachers.
It is our intention that you find this website easy to navigate and that you find the information you are seeking. The information provided is intended to give you an insight into the functioning of the school and more importantly the wide range of daily activities that learners engage in.

BELLVILLE FLATS PUBLIC SCHOOL was opened on 25 January 1909 with 24 pupils. The English-medium School was housed in the hall of the German Church in Kasselsvlei Road until 1930. At this time, only two rooms were available and more than 100 pupils and four teachers had to be accommodated in them. Mesdames Harris, F. Sickler and G. King served successively as principal of the school.

In October 1928, Mr Matthew T. Taylor was appointed principal of the School. During the following year a site was purchased from Mr E. Lucke in Bellville South. The new building inaugurated in June 1930, consisted of four classrooms and a staffroom and during that year the enrolment increased to 118 pupils. The School now became known as the BELLVILLE SOUTH PRIMARY SCHOOL. Parallel English/Afrikaans classes were introduced in 1930. In 1948 the School registered its own colours – red and dark blue being the basic colours.

In 1958, after Bellville South was declared an area for Non-Europeans by the Government, the School Committee started negotiations with the School Board. The existing school would also be unable to accommodate the anticipated enrolment of 600 pupils, therefore a new site in a European area would be more desirable. After intensive negotiations it was decided that a school be built on a site off Lincoln Street in Boston Estate. At that time an English medium school was greatly needed in Bellville. At the end of 1959 the building in Lincoln Street was almost completed.

BOSTON PRIMARY SCHOOL 1960 – (First English medium school in the Northern Suburbs).
When the school term commenced in January 1960 the Headmaster, Mr M.T. Taylor, and his staff were ready to receive and accommodate 273 pupils.

Basic colours of the uniform were grey, strawberry pink and a light yellow. The blazer was a dark pink with a badge – background grey. The badge was designed by Paul Malherbe, artist and actor – motto: Ex alto Afflatus. Girls wore a grey pinafore with light yellow blouse. The School song was composed by M.L. de Villiers, composer of the music of the Call of South Africa.

The inauguration of Boston Primary School building took place on 23 February 1960. The Architect, Mr K. Stander, handed over the key to Mr Liebenberg, Superintendent of Education, who then opened the new building

Boston Primary School is named after the suburb of Boston in the municipality of Bellville, which took its name from the City of Boston in the United States of America. This American town was, in turn, named after the town of Boston in England. Street names in this suburb are a reminder of English Prime Ministers and American Presidents and cities. This origin was the leading thought in the design of the school arms.
If one thinks of America one sees the red-striped flag with the blue canton with stars. For this reason white and red stripes form the main part of the school arms.
By dividing the shield ‘per chevron reversed’ a triangular blue ‘chief’ is made on which is placed a coronet or crown from the arms of the Borough of Boston in Lincolnshire, England (shield with three coronets or crowns). This crown has no particular royal meaning but probably refers to the sovereignty of Boston. Very little is known about the origin of the arms of this ancient borough, but three crowns or coronets are often associated with the legendary King Arthur.

Boston is a values driven school and our focus currently is on the following values. 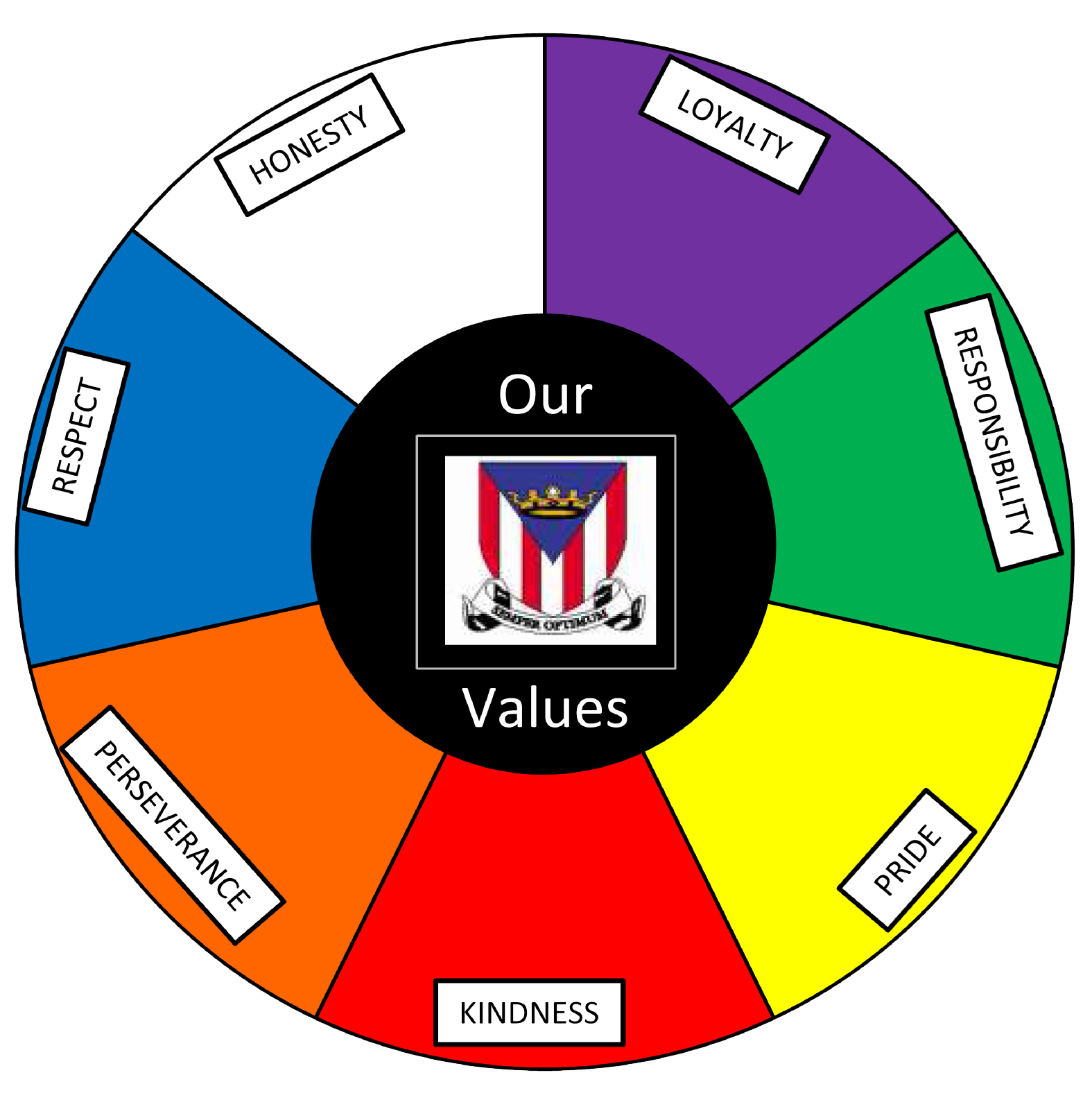